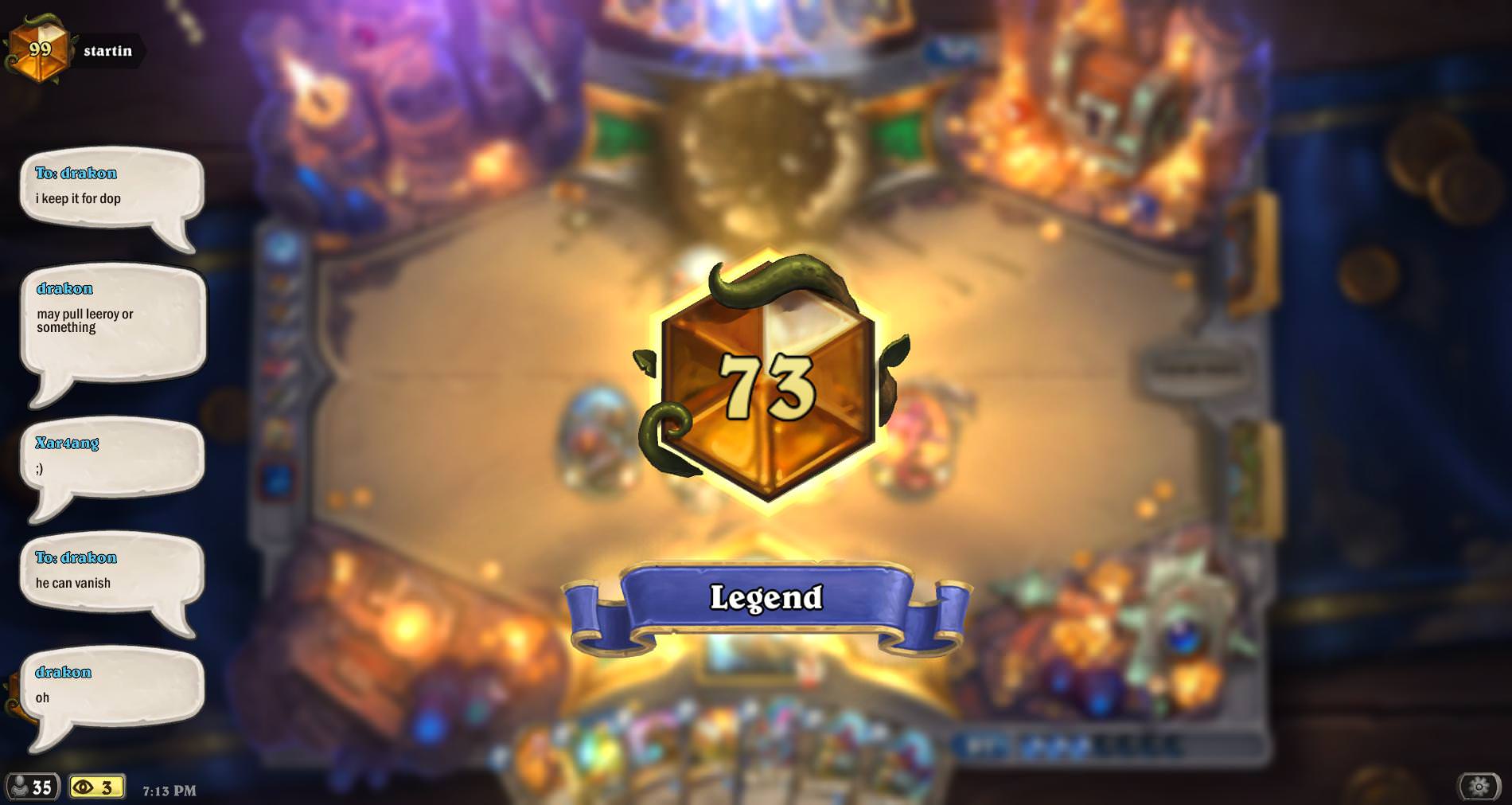 Haze said to me I am the only player to have reached legend with Shaman in KnC.

Gazlowe is a REALLY good value engine in this deck, absolute beast if you can combo it with Unstable Evolution (instead of having a few mana floating around after you use UE), or you can just Evolve it if it doesn't have any other use.

Paladin (14-8): I used to call this deck the Paladin killer. It just has so many clears, taunts and way to swing the board. You basically just exhaust them through beefy taunts, value clears and then drop down a couple of free Creepers and Giants then evolve them to regain board. However, sometimes Paladin can just do Paladin stuffs. If they hit double Divine Favor, or worse, a good Tarim turn, there's little you can do. Also, if their build is a bit more midrangey with multiple buffs, you might find yourself struggling quite a bit. Dirty Rat on two is usually not a problem, since you can value clear whatever comes out later no matter how big. You can keep Drakkari Defender as well if you don't have any early clear, conventional Aggro Paladin builds have a hard time getting through a 2/8.

Druid (13-3): My favorite class to face. 'Devolve' singlehandedly hands us win if you play it strategically. Unlike versus Paladins, you don't keep Drakkari Defender versus Aggro Druid, they can just buff up their little shits then value trade and you might be behind on both tempo and card advantages. Other than that, the general strategy is the same. Versus any kind of slow Druid, you can just build a big board and keep Devolve for their Plague turn, they have absolutely no way to come back. Or you can just Rat their Malygos.

Mage (4-2): the matchup is pretty okay. Against Aggro Mage, you play the same gameplan, and Healing Rains are pretty valuable in this matchup. Against Exodia, it's important to build a huge board early with Doppelgangster, make sure you're able to deal with Doomsayers, and Rat out their win conditions if you're not yet able to pressure them.

Warrior (2-0): You will never lose against Control Warrior if you know how to maximize your resource, Hex their deathrattles and not to overcommit. I think you should do well versus Pirates, even though I haven't faced a single one of them.

Shaman (4-0): Fuck Aggro Shaman man there's a new king in town now. Dealing with Aggro Shaman is even easier than board centric aggro decks, you just need to make sure to not let a 7-7 hit your face even once.

Rogue (3-1): Keleseth Rogue can be tough if they have a good hand, but Mill Rogue is manageable. I tend to keep Dirty Rat because Ratting the blue little shit slows them down quite a lot. You have multiple ways to suddenly build a big board versus Mill, and they need to have Vanish (oftentimes two of them) to be able to deal with the pressure you create.

Warlock (6-6): Do you have Hex or Devolve at important times? Good, you got half the job done! Don't use Hex on a mere 2/2 or 3/4, you'll soon regret it. Rat down their Cubes and N'zoth helps a lot too. You have another out by pressuring them with a big Evolve turn; like Druid, Warlocks have very little ways to deal with a sudden big board. However, if you queue into Giantlock, you can start crying.

Hunter (2-2): Is it Aggro? Good. If it's not? All is not lost! Do your best to delay their Giant turn: don't hit face for example. Place down Taunts and deal with their Sea Witch the turn it goes down. Hitting into Taunts decrease Giants' health, and your big board clear might be able to take care of the board. You'll oftentimes just need to deal with their board once, so you'll have plenty of room to build counterpressure as long as he doesn't hero power you down.

Priest (5-12): This matchup is ABYSMAL. If your pocket meta is Reno Priest, don't play this deck, ever. You have almost 0% chance of winning unless you're incredibly lucky with your Rats. Big Priest is less tough, like Cubelock, it comes down to whether you have transform effect at the right time and if your opponent can deal with sudden pressure. You don't need to worry about Combo Priests, this deck just slaughter it.