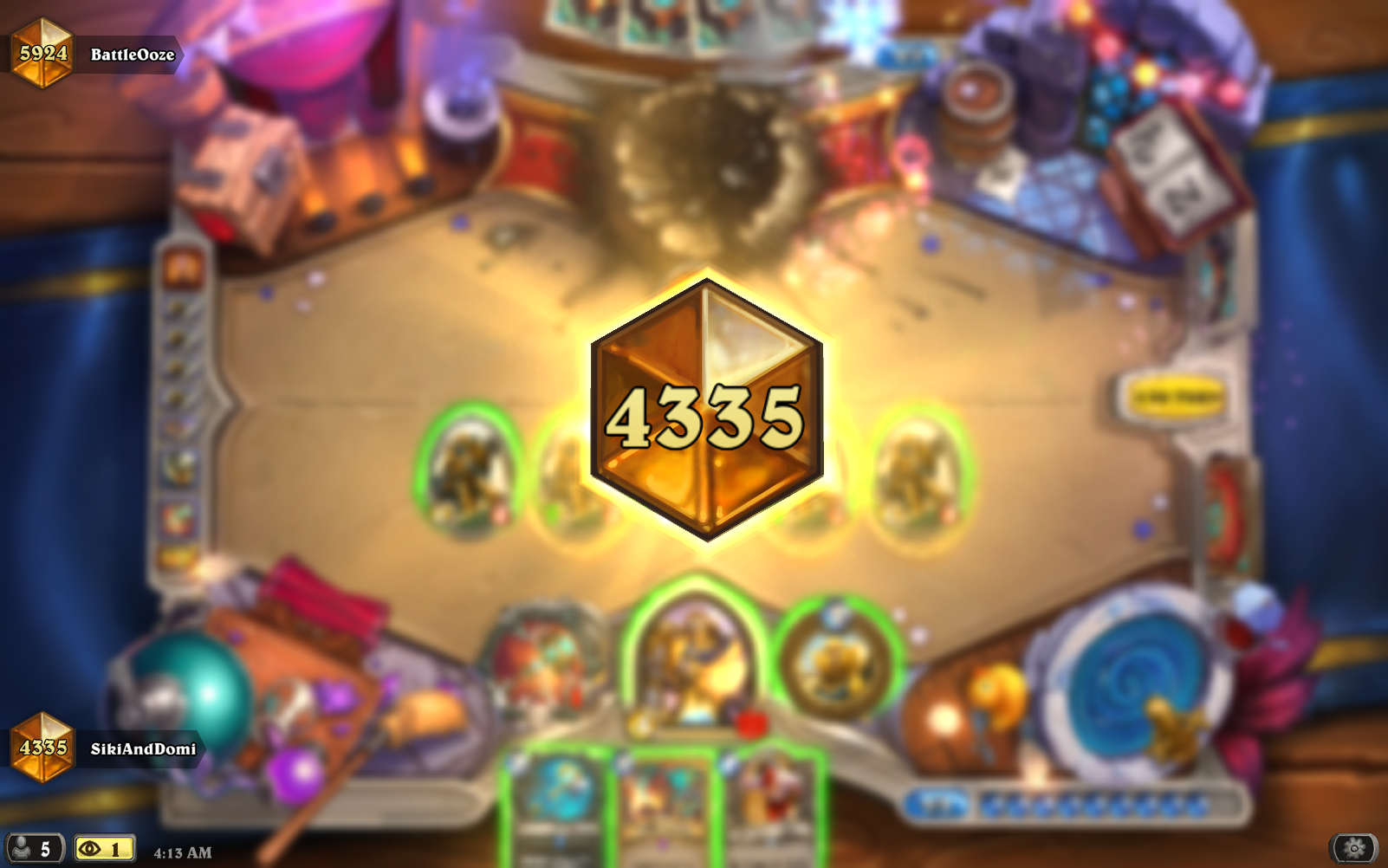 Keep Corridor Creeper, even both if you open two.

Keep one Knife Juggler and one Call to Arms.

Keep Drygulch Jailor if you have Knife Juggler, or as a 2 drop if you don't have any turn 1 plays that leave you with 2 minions.

Keep Rallying Blade if you have a 1 drop.

Keep Unidentified Maul if you have a 1 drop and a 2 drop.

Never keep anything else above 2 mana.

If you want even more power and even less consistency, remove a card for Millhouse Manastorm, but UNDER NO CONDITION should you play him from hand. You have been warned.

Patches the Pirate -> remove all pirates from the deck and play Argent Squires and a second maul, or if you're already playing them, play 2x Arceus Veteran and an Acidic Swamp Ooze.

If you're missing all the legendary minions, Patches the Pirate is the crafting priority, not having him impacts your deck the most. Second would be Sunkeeper Tarim, who can swing games like Tiger Woods can swing a club.

The other two legendary cards still hit harder than what Mike Tyson used to hit hookers like in his prime, but not having them will impact your deck less.

Guide and writeup are coming in about a week, sorry guys, I have a lot of plans for the next week!

Along with Cubelock, the sad 40 year old virgin's deck, aggro paladin (manly Chad's favorite deck) is the sh!t right now. While aggro paladin has existed for a long, long, long time, this is my take on it with all the new cards.

Have you ever played a deck that made you so happy you had a tear in your eye and it wasn't control warrior? No? This deck might change that!

Do not trade unless it is a 1-drop for a 2-drop or a 1-drop for a 1-drop that would kill your 2-drop. Go for those value trades, it's not that hard to spot them, but I can't tell you all of them, it's something you have to figure out for yourself and it becomes easier the longer you play Hearthstone (especially aggro decks).

Playing around board wipes is a luxury:

Priest can board wipe you once each with:
-2 mana (also heals him for the number of minions on the board)
-6 mana
-8 mana (only kills power 5+ minions)
And possibly one-two more times (usually with 5 mana, 2 damage and 2 heal and/or a Kazakus potion).
He can also use spot removal once each on a 3 or less power and a 5 or more power minion. He also has Potion of Madness, which is very uncool against Drygulch Jailor.

Warlock has 2 Defile and 1-2 Hellfire, along with 2 of his spellstones that deal 3+ damage with lifesteal, which you can't really play around. His real win condition against you is Voidlord. Fuck that card.

Play around board wipes if you have enough cards in hand to establish a board after it is wiped (Call to Arms is usually enough to make a comeback all by its own if your opponent has an empty board).

If your opponent is about to have a board wipe turn, you probably want to play Drygulch Jailor.

Whatever you do, factor in Corridor Creeper, he gets cheaper when you get board wiped and encourages trading. If your opponent plays a deck with this card, watch out for that too.

If you draw Patches the Pirate, try to keep him in your hand to combo him with Val'anyr.

If your opening hand is 2 1-drops, one of which will summon you 2 minions (Lost in the Jungle or a pirate) and a Knife Juggler, play the 1-drop that will only give you 1 minion turn 1, hero power turn 2 and play Juggler with 2 minions turn 3. I hope you can figure out how to do this faster with a coin on your own.

If you have both Knife Juggler and Dire Wolf Alpha in your starting hand, you probably want to play Juggler first.

Drygulch Jailor's deathrattle makes a Knife Juggler worth keeping in hand for a turn.

Knife Juggler into Call to Arms is sick, but getting a board wipe onto a field like that without Corridor Creeper in hand is sicker.

99% of the time, you prefer killing minions with your weapon instead of trading. Factor Creeper into this.

You want to keep most weapons at 1 durability by going face with them, especially if you play a variation with 5 weapons. If you have no minions in hand and cannot set up lethal, avoid playing Val'anyr, since it can get destroyed by one of the many Oozes people might play.

Remember that Southsea Deckhand had charge while you have a weapon equipped. Remember it.

Try to get Pachy Pachy el Pirato out of your deck before playing Call to Arms, but do not sacrifice too much tempo in order to do so.

When playing against control decks, sometimes the correct play is risking everything to set up lethal with a topdeck. The longer the game goes on, the lower your chances of winning.

Play Drygulch Jailor and trade him right before playing Divine Favor, then go to Options and press the button labeled "Concede"!

Say "Greetings" only when the game starts.
When you have lethal, kill. Do not drag the game on. Nobody gives a flying fuck about what you have in your hand. If you absolutely must play cards for a quest, do so quickly.

Say "Well played" only after a really good match.

Don't be a bitch. Don't add players who you played against only to insult them. If someone else adds you and insults you, be nice. It hurts their egos even more. Also, point them to this site, I'll happily receive their views! :D

If your opponent was a little crybaby right before losing, by roping you, spamming cards from his hand or spamming emotes, say "Thanks" after you beat him. It's the only time you can do it without rotting in hell for eternity.

Check out my other decks. There will be more in the future.

If anyone from the Facebook group "HearthStone Balkan" is here, hi.

For what it's worth, this deck brought me to legend despite my less-than ideal luck. I was changing decks between this and the more consistent build as I went. If this deck gets people to whatever ranks they are aiming for - 10, 5 or even legend, then I haven't posted and written all of this for nothing. Believe it or not, I hope you guys do well with this deck. In the mean time, I'll be brewing something new and even more disgusting!