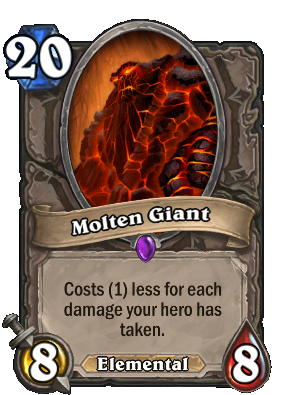 It was announced on April 20th, 2016 that Molten Giant would receive a nerf.

Quote from Blizzard
Molten Giant is an interesting card, but it’s too easy for players to reduce its mana cost to 0. We’re increasing Molten Giant’s mana cost to 25 to increase the risks players must take to get a free Giant. The changes to Force of Nature and Arcane Golem will make dropping to low health somewhat less risky as well, which helped spur this change.

Costs (1) less for each damage your hero has taken.

He gets terrible heartburn. BECAUSE HE IS FULL OF LAVA.