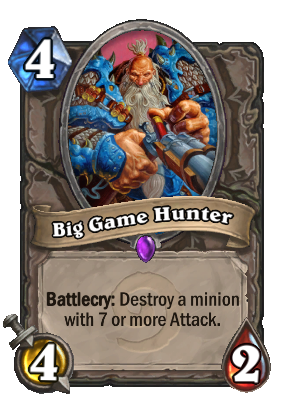 It was announced on April 20th, 2016 that Big Game Hunter would receive a nerf.

Quote from Blizzard
Big Game Hunter represents an inexpensive source of removal that is packaged with a minion. It’s efficient enough that some Heroes with powerful Class-based removal cards choose to run the neutral Big Game Hunter. We’re increasing the cost of the card from 3 mana to 5 mana.

Battlecry: Destroy a minion with 7 or more Attack.

Mere devilsaurs no longer excite him. Soon he'll be trying to catch Onyxia with only a dull Krol Blade.