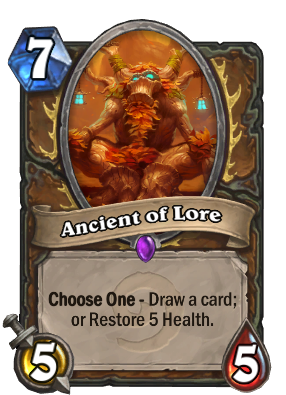 It was announced on April 20th, 2016 that Ancient of Lore would receive a nerf.

Quote from Blizzard
Drawing cards is powerful in Hearthstone, and Ancient of Lore easily found its way into nearly every popular Druid deck. We’d like Druid players to feel that other cards can compete with Ancient of Lore, so we’ve reduced the number of cards drawn from 2 to 1.

Choose One - Draw a card; or Restore 5 Health.

Go ahead, carve your initials in him.