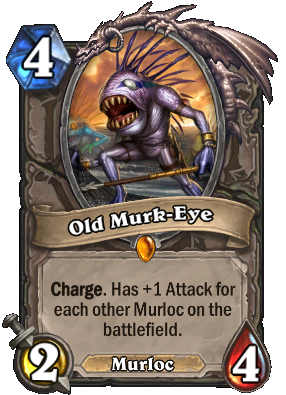 Update: The quest to obtain Old Murk-Eye is no longer available with the introduction of Standard format as he cannot be played in Standard. The only way to obtain this card is through the crafting system now. Information below has been kept to be historically accurate.

Old Murk-Eye was a reward from the quest Mrglglglgl!, which requires you to unlock all of the Murlocs in the Basic and Expert card sets. There is a Golden version of the card that is also available through a different quest, Golden Mrglglglglgl!, which requires you to collect all the Golden Murlocs in the Basic and Classic card sets.

You only need to have one of each Murloc for quest completion and not two. Below is a list of the Murlocs required for both achievements, and how you can obtain them.

Charge. Has +1 Attack for each other Murloc on the battlefield.

He's a legend among murlocs. "Mrghllghghllghg!", they say.